Guatemala is located in Central America, bordering the Pacific Ocean to the East and the Caribbean Sea to the West. It is bordered by Belize to the Northeast, Mexico to the north, and with Honduras and El Salvador to the southeast.

Guatemala was the heart of the flourishing Maya Indian civilization from 500AD to 900AD. After the collapse of the lowland Maya cities in late 800sAD, the Maya cities of the central highland mountains continued until they were conquered by the Spanish, who first arrived in 1523AD and colonized the area. Guatemala became independent of Spain in 1821.

More than half of Guatemalans are descendants of indigenous Maya people and mestizos (a mix of European and indigenous ancestry). Most of Guatemala’s population is rural. The predominant religion in Guatemala is Roman Catholic, but in recent years Evangelical religion is on the rise. Both Protestant and traditional Mayan religions are practiced.

The official language is Spanish, but it is often the second language among some the indigenous population. Several Maya language dialects are still spoken, especially in rural areas. Guatemala’s currency is the Quetzal, named for its national bird, the Resplendent Quetzal. Click here for current exchange rate.

Guatemala has a history of revolutions, coups and non-democratic governments. The last guerilla war ended in December 1996 with the signing of the peace accords, which ended 36 years of civil war, leading to successful democratic elections in 1999, 2003 and 2007.

The agricultural sector exports, coffee, sugar, and bananas and occupies one half of the labor force. Tourism has now become an important part of the country’s income.

Except for the coastal areas, Guatemala is mostly mountainous. Most of the cities and population are situated in the southern half of the country.

The country is divided into 22 states called departments, each with a capital.

Guatemala is the only Central American country where the indigenous Indian people are in the majority, and their culture is vividly conveyed in their bright, often hand-woven textiles. Before the Spanish Conquest, the Maya civilization was probably the most advanced in the Americas at that time. Actually it began to fall before Columbus arrived, and many of the Maya cities are still being discovered in the thick jungle in the north.

Arriving by air in Guatemala City you’ll see a sprawling metropolis shouldered by three volcanoes: Fuego, Agua and Pacaya. Pacaya is Central America’s most active volcano. This capital city has several museums that offer the visitor an in site to the Maya. The Popol Vuh Archaeological Museum is very good and interesting. The Popol Vuh is the Maya sacred text describing many Maya legends such as the story of the ball-playing twins who fought the lords of the underworld and became the Sun and the Moon. The Ixchel Museum of Indigenous Textiles and Clothing is also interesting. It explains the ancient Maya art of weaving which you will see across the country. back to top

Background: The Maya civilization flourished in Guatemala and surrounding regions during the first millennium A.D. After almost three centuries as a Spanish colony, Guatemala was freed of Colonial Spanish rule in 1821. During the second half of the 20th century, it experienced a variety of military and civilian governments as well as a 36-year guerrilla war. In 1996, the government signed a peace agreement formally ending the conflict, which had led to the death of more than 100,000 people and had created some 1 million refugees. 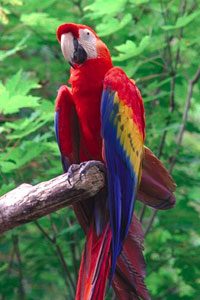 Guatemala, originally known as Goathemala, ‘land of trees’, is part of Central America. Within its borders is the largest cloud forest of the region, plus the approximately 1,400,000 hectares part of Maya Biosphere Reserve. The biological diversity of the isthmus has enabled Guatemala to rank among the 25 countries with the greatest variety of natural resources in the world. Millions of species reside in the diverse ecosystems that are found here, and unfortunately, most of them are in danger of extinction.

Guatemala has 18 ecosystems, Over 300 microclimates and more than 37 volcanoes, of which Santa Maria, Santiaguito, Pacaya & Fuego are active. Studies show that rainforests (sometimes called the lungs of the world) and ecosystems serve as a massive air filter to clean the atmosphere of pollutants and produce oxygen that extends much farther than the borders of Guatemala and tropical Central America itself. The forests of Guatemala, and of every country in the world, are part of the solution to the problem of global warming.

Guatemala possesses great natural and cultural richness. Contributing to the cultural richness is the ethnic diversity. In some ways local populations live out their entire lives in harmony with the jungle. However in other ways, for generations, they have unknowingly been destroying their future with slash & burn agriculture. Needless to say, the Guatemala jungle is in great danger, because of uncontrolled exploitation of its natural resources, legal and illegal deforestation, the sacking of archaeological sites and the extermination of exotic species.

Those who live and visit the Guatemalan jungle have joined forces and called for world attention to the situation. Today, this destruction of the natural resources continues at an alarming rate. At La Casa De Don David, we are strong believers in sustainable tourism policies. As eco-travelers, please give your support by visiting the country without leaving a trace, respecting nature, the indigenous people and by supporting localized sustainable development. Our communities need the tropical rainforest in order to survive. Hopefully the sustainable tourism programs that are being established in reserves and communities will provide an alternative solution to the continued destruction. By promoting the cultural and natural sites of Guatemala, we are supporting the preservation of life in the neo tropics. We endeavor to make Guatemala a true-life sanctuary. Please help to preserve it. back to top

Guatemala’s climate varies according to altitude. The coastal regions and the north are hot throughout the year with an average temperature of 26°C (80°F) sometimes rising to 40°C (104°F). March and April are the hottest months. The rainy season, from May to September, brings afternoon rain, humidity and mosquitoes, especially in the Petén area. In the higher climes of southern Guatemala, temperatures stay cool and fall sharply at night.

Guatemala’s annual rainfall ranges from 70 inches in the North to almost 200 inches in the South. Current global weather conditions and changes are making traditional predictions somewhat invalid. Generally the weather is good, but if you happen to be in the country during any small tropical storm it can rain for several days. In Petén, late October through February are the cooler months, with December through February temperatures getting as low as 11°C or 51°F, if only for a few days. Most visitors find these months the most pleasant to visit the area. March through May are normally the worst. Average humidity for Petén is 85%. Average rainfall in El Remate area is 62 inches. back to top 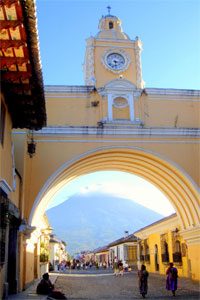 Most travelers spend little time in Guatemala City and find accommodations in Antigua. Antigua Guatemala is a brightly colored historical colonial capital city and it was the first place in the Americas to be laid out on a grid pattern, thus setting the style for cities of many cities in both North and South America It was abandoned as Guatemala’s capital in 1776 because of the almost constant earthquakes. Now it is a major tourist destination with some fancy hotels, but the town has not lost its colonial charm. Antigua is known for its coffee.

The Spanish conquistadores built an abundance of churches in Antigua and they are now all in varying states of disrepair. The cathedral on the main square is just a facade and best seen lit-up at night, but La Merced to the north of town maintains its full three dimensional glory and the monastery has great views over the volcanoes from the roof. 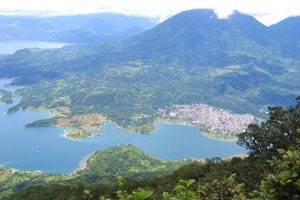 There are numerous little towns to visit in the Lake Atitlán area. In Santiago de Atitlán, textiles overflow from market stalls in dazzling colors and patterns. Some are intricately hand-woven and embroidered, and bargaining is expected. Transport is usually by local boat service, which takes tourist and natives to all almost towns on the lake. The main tourist boat of the day normally leaves the Playa Publica (public beach) at Panajachel, the lake’s visitors center, at 8.30am. It stops at San Antonio (for the volcanic hot springs), then San Pedro and Santiago de Atitlán, for the market and a glimpse of the Maya Saint Maximón San Marcos La Laguna is a spiritual center. The local beaches are secluded and calmer than others, except on washing day when the local Maya women are washing clothes in the lake. Outdoor enthusiasts can grab a picnic and escape into the hills on scenic walks.

Some visitors like to paraglide and launch themselves from the sheer cliffs around Lake Atitlán order to ride the thermals. Other activities are rock-climbing, horse riding, fishing, scuba-diving and kayaking are also popular. 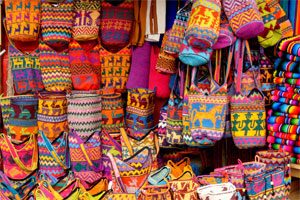 Follow winding roads up the mountains of Quiché and you’ll find Chichicastenango, famous for the Thursday and Sunday market scene. The K’iche’ Maya inhabit this region, and on market days the people of Chichi hold a mix of Catholic and Maya ceremonies around the 400 year old Santo Tom’s church. At the market, you’ll find an array of weavings, masks, flowers, pottery and medicinal plants, among others – if you’re looking for Guatemala keepsakes, this is one of your best shopping opportunities. 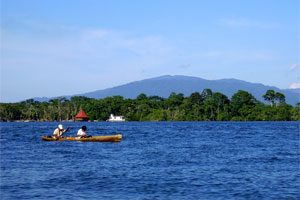 The freshwater Río Dulce (Sweet River) flows from Lake Izabal to the Atlantic Ocean. A destination for sailboats from around the world, the town itself is nothing special – crowded and messy – but cruising on the river is spectacular, with an abundance of tropical nature. Take a scenic 2 hr (each way) boat ride to Livingston, home to Guatemala’s Garifuna population and the only part of the country that can offer you a taste of Caribbean culture. Try the fabulous ‘Pan de Coco’ (coconut bread) or ‘Tapado’, a fish and seafood stew made with coconut milk and plantain. Other attractions near Río Dulce include: Castillo de San Felipe, Finca Paraíso hot waterfalls, Biotopo Chocón Machacas, and Quiriguá ruins. 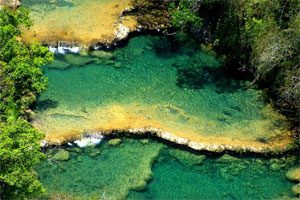 The city of Cobán serves as a hub for visiting the Verapaces region, particularly Semuc Champey, and catching a glimpse of the elusive Quetzal bird in the nearby cloud forest. The Biotopo del Quetzal, some 30km south of Cobán, although established for this purpose, rarely are the birds seen here. A private reserve across from the Biotopo entrance is your better chance, early morning tours can be arranged through local travel agencies. The Biotopo is still an interesting visit, as the cloud forest, with giant tree ferns, is considerably different than what you’ll find in the Petén region.

While in Cobán, if you’re interested in orchids, visit nearby nursery Vivero Verapaz. It houses thousands of species, including the rare Monja Blanca, Guatemala’s national flower. Also in the area are a few coffee plantations, most of which offer tours. Semuc Champey is becoming a popular destination, although still considered somewhat of a hidden gem. This large limestone bridge over the Cahabón river has cascading, crystal-clear emerald green pools deriving from a natural spring. Swimming is superb and the site is still off the beaten path, with access from Lanquín possible only by 4X4 vehicle. Stay in Lanquín and if you have spare time visit the nearby caves. Keep in mind that the weather in Cobán area is usually overcast, chilly and rainy. If you are around during the month of July don’t miss the Rabin Ajau, a modern Maya beauty contest, or in December the National Orchid Show. 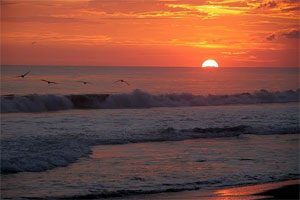 The Guatemala Pacific coast is famous for sail fishing. The coasts black sand beaches attract tourists for stays at the resort areas of Sipacate and Monterrico, where nesting turtles burrow in the sand. back to top